No highlights have been published so far.

Are you enjoying icomancer?
Do you have some cryptocurrencies to spare?
We'd love if you donate them! 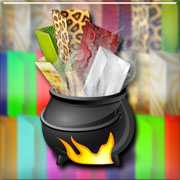 Two new folder templates released!
A user asked us on the forum for a non-transparent version of the Vista and Windows Crystal Blue templates. We put our hands on them and now are available for download. view

If you have some questions about icomancer, this is the best place to start. If you don't find the answer to our question, feel free to visit the Help & Support Forumand use the search engine or post your question. Our tech support guys will answer as soon as possible.

icomancer is a folder icons composer application based on templates. Your selections of folder template, color, texture and style, plus any image you want to craft, are the elements used by icomancer to build your icons.

No. There's no editing capability for icomancer, at least not in the current build.

icomancer is made to let you assign icons to your folders in ways you haven't experienced before, giving you full control on what you want your folders to look like.

icomancer is free for personal and commercial use as long as you are an individual or a small-sized company (with up to 10 employees). Companies with more than 10 employees need to get a Corporate License Pack in order to use icomancer.

icomancer's functionality isn't limited for any version. You can craft any image as icon, imbue any icon to any folder or shortcut, copy icons to your collections and download some content from our galleries.

Please note that online functions (submit or download) require you to create a free account in our server.

The standard version gives you access to premium content created by our design department. New templates, color palettes, texture sets and add-on icons are released for standard users, and the creations they share with our community are only available for download by other standard users.

icomancer is a Windows Forms application based on Microsoft's .net Framework 4. Thus, the supported Windows versions are all from Windows XP Service Pack 3 to Windows 10, including server releases.

Icomancer is designed as a 32 bit application, so it will run seamlessly on 64 bit CPUs. And yes, due to the nature of its components, icomancer support multiple cores.

Not really. But here are some tips:

We've made some tests and got icomancer running at a decent speed with a 500 Mhz Pentium II CPU with 384 MB of system RAM.

But we noticed better performance with multi-core CPUs.

Disk space requriements: icomancer generates lots of temporary files for icon composition. They're purged on every run, but the space needed to properly run can be about 100 MB, depending on how much templates, colors, textures and add-on icons you have installed.

Because it doesn't need it. Bug fixes are published as they're spotted, yet, most relevant bugs are already fixed.

Being that said: icomancer is not perfect... but it does its job, and it does it as advertised.
It can be improved in a number of ways, but since it is not a big source of income for us, we can't afford investing resources on it.


Do you think we need to add more questions to this list?

Please feel free to post other questions using the Disqus comments system below. We'll review your proposals and add them here.